Gethin Chamberlain, in Gaziantep, Turkey, for the Sunday Mirror, 11 June 2016

Four-year-old Shahd lay covered in dust when her mother found her. Her right leg was gone, taken off by the blast of a barrel bomb.

Close by, her brother lay dead, his head smashed.

A moment earlier they had been just another family struggling to cope with the harsh daily life in the besieged city of Aleppo in Syria.

Then the barrel bomb – an improvised device dropped by a government helicopter – exploded beside them.

“Mama, how am I going to walk?” Shahd cried. “Can I go to the street? Can I walk in the street, mama? 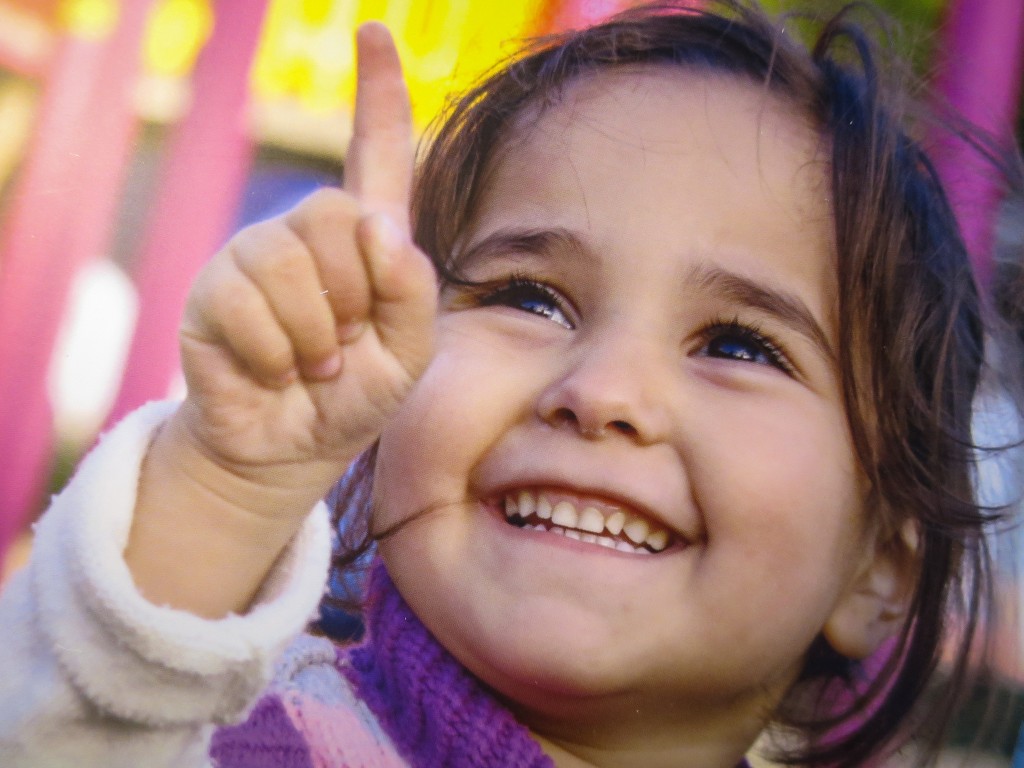 Yet incredibly, little Shahd Al Mounbark can now walk – thanks to a clinic across the border in Turkey, where EU funds are helping to temper the tragedy of her and so many innocents like her.

Shahd is one of tens of thousands of injured children who have fled the war in Syria. Thousands still wait to be fitted with artificial limbs.

The clinic that treated her is in the Turkish city of Gaziantep, just 30 miles from the Syrian border and 60 miles from Aleppo.

Doctors there are fitting 15 refugees every month with prosthetic limbs – but are having to turn away three times that number.

Shahd was their first patient – brought to them with a piece of plastic drainpipe taped to her stump as a makeshift leg.

Her story has been captured in a heartbreaking video, produced by the clinic to show her recovery. 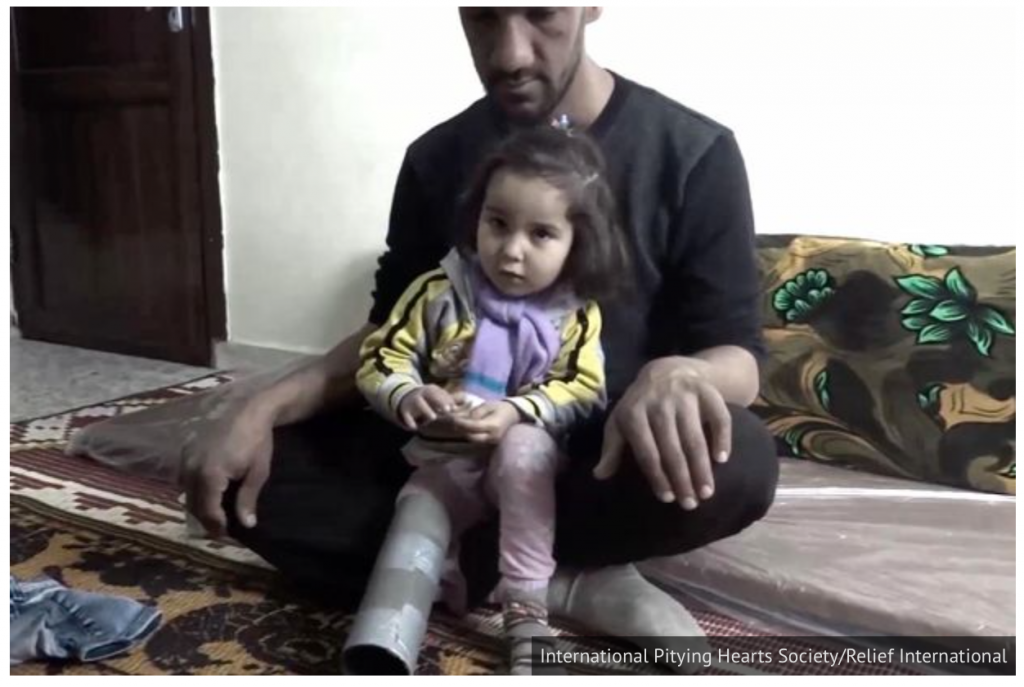 In the film, shared with the Sunday Mirror by Relief International, Shahd is seen crawling across the floor dragging the pipe behind her, and trying to negotiate a flight of concrete steps on her bottom.

She is shown being carried through Aleppo by her uncle Mustafa, then cuddled by mum Yasmin – who tells her story as the little girl sits on her lap and weeps.

Yasmin said: “There was an explosion and the stones scattered round and I was looking for my children – but I couldn’t find them.

“Everywhere was dust and I was alone. My husband came and he wanted to hold me and I asked him, ‘Where are my children’ and he said they are fine, they are safe.

“When my husband held me I said, ‘Leave me, I want to see my children, where are they?’

“I said to my husband, ‘My heart is really hurt, something bad has happened’. When I found Shahd, she had lost her leg.” 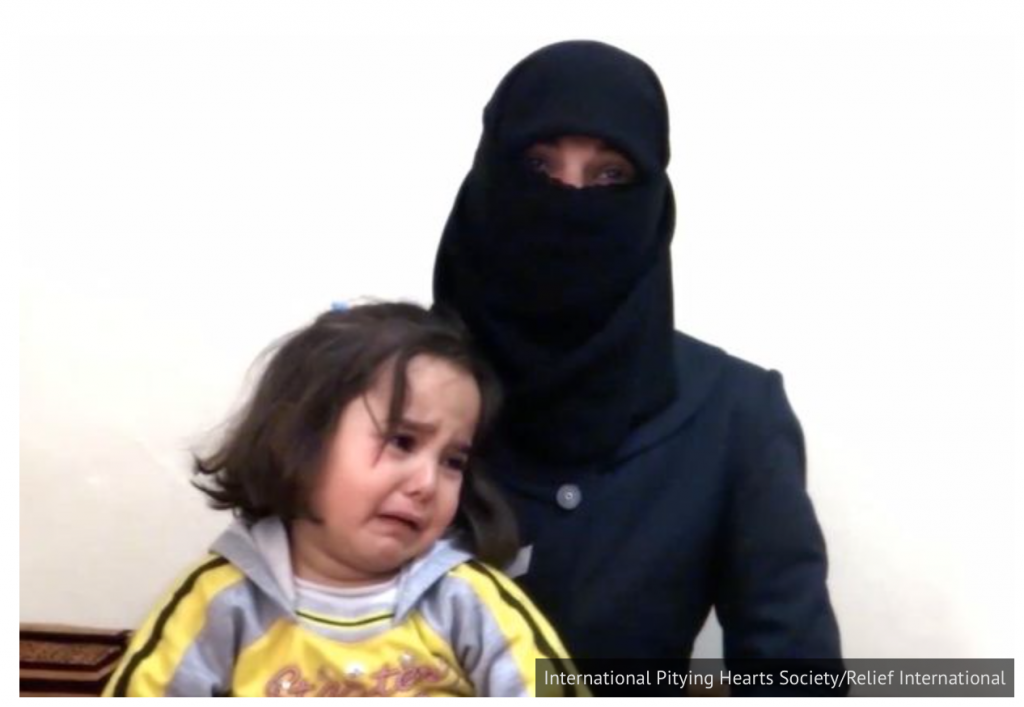 Later, as the little girl sits on the ground with dad Muhammad, she tells him: “Children are not playing with me any more.”

Asked why, she replies simply: “I haven’t got legs.”

Despite terrible injuries, Shahd has fought bravely in the 30 months since the attack.

Now six and living with her parents in Urfa, Turkey, she visits the clinic twice a year to have the limb adjusted as she grows. 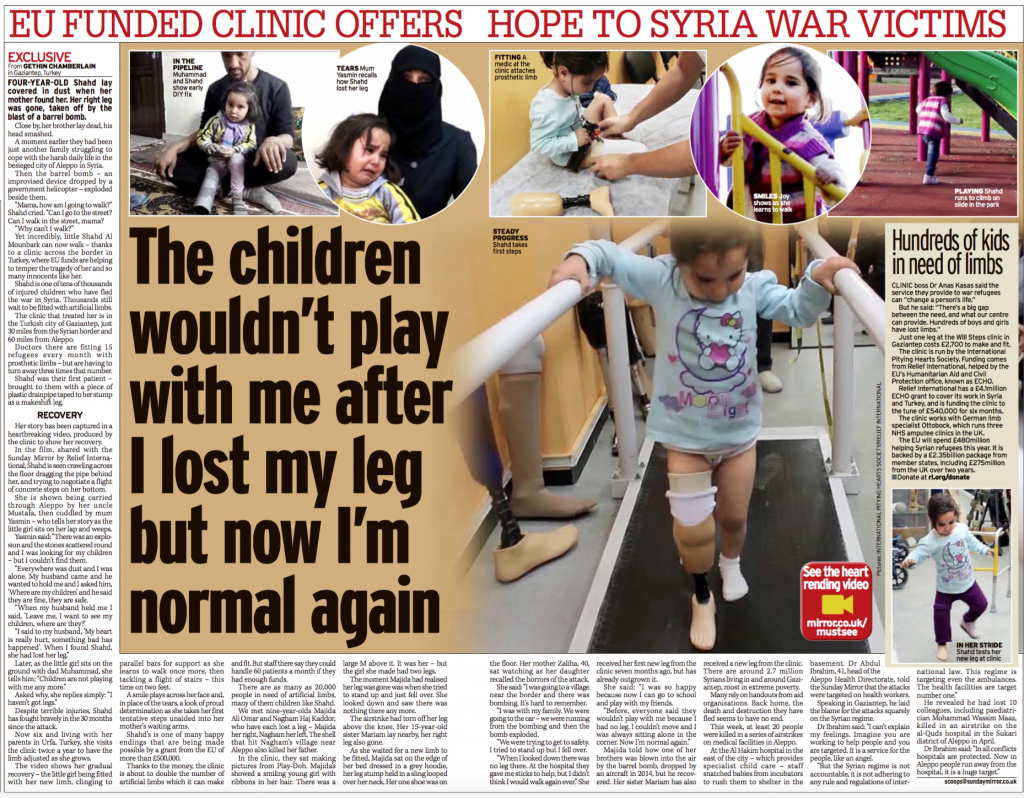 The video shows her gradual recovery – the little girl being fitted with her new limb, clinging to parallel bars for support as she learns to walk once more, then tackling a flight of stairs – this time on two feet.

A smile plays across her face and, in place of the tears, a look of proud determination as she takes her first tentative steps unaided into her mother’s waiting arms.

Shahd’s is one of many happy endings that are being made possible by a grant from the EU of more than £500,000.

Thanks to the money, the clinic is about to double the number of artificial limbs which it can make and fit. But staff there say they could handle 60 patients a month if they had enough funds.

There are as many as 20,000 people in need of artificial limbs, many of them children like Shahd. 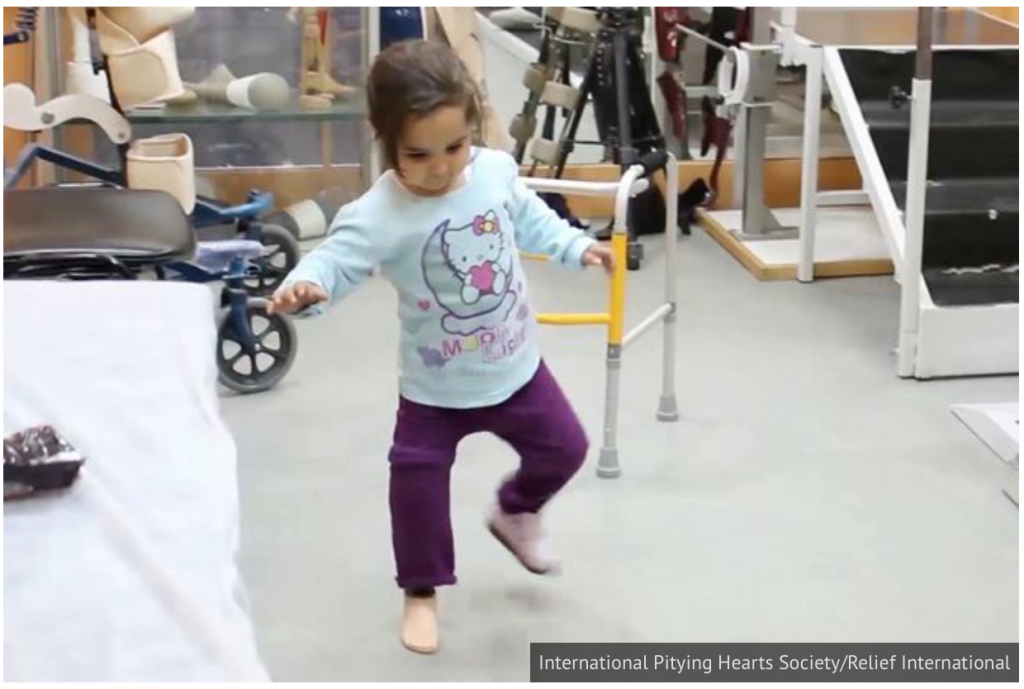 We met nine-year-olds Majida Ali Omar and Nagham Haj Kaddor, who have each lost a leg – Majida her right, Nagham her left. The shell that hit Nagham’s village near Aleppo also killed her father.

In the clinic, they sat making pictures from play dough. Majida’s showed a smiling young girl with ribbons in her hair. There was a large M above it. It was her – but the girl she made had two legs.

The moment Majida had realised her leg was gone was when she tried to stand up and just fell over. She looked down and saw there was nothing there any more.

The airstrike had torn off her leg above the knee. Her 15-year-old sister Mariam lay nearby, her right leg also gone.

As she waited for a new limb to be fitted, Majida sat on the edge of her bed dressed in a grey hoodie, her leg stump held in a sling looped over her neck. Her one shoe was on the floor. Her mother Zaliha, 40, sat watching as her daughter recalled the horrors of the attack.

She said: “I was going to a village near the border and there was bombing. It’s hard to remember.

“I was with my family. We were going to the car – we were running from the bombing and then the bomb exploded.

“We were trying to get to safety. I tried to stand up but I fell over.

“When I looked down there was no leg there. At the hospital they gave me sticks to help, but I didn’t think I would walk again ever.” She received her first new leg from the clinic seven months ago, but has already outgrown it.

She said: “I was so happy because now I can go to school and play with my friends.

“Before, everyone said they wouldn’t play with me because I had no leg. I couldn’t move and I was always sitting alone in the corner. Now I’m normal again.”

Majida told how one of her brothers was blown into the air by the barrel bomb, dropped by an aircraft in 2014, but he recovered. Her sister Mariam has also received a new leg from the clinic. There are around 2.7 million Syrians living in and around Gaziantep, most in extreme poverty.

Many rely on handouts from aid organisations. Back home, the death and destruction they have fled seems to have no end.

This week, at least 20 people were killed in a series of airstrikes on medical facilities in Aleppo.

At the Al Hakim hospital in the east of the city – which provides specialist child care – staff snatched babies from incubators to rush them to shelter in the basement.

Dr Abdul Ibrahim, 41, head of the Aleppo Health Directorate, told the Sunday Mirror that the attacks were targeted on health workers.

Speaking in Gaziantep, he laid the blame for the attacks squarely on the Syrian regime.

Dr Ibrahim said: “I can’t explain my feelings. Imagine you are working to help people and you are targeted. It is a service for the people, like an angel.

“But the Syrian regime is not accountable, it is not adhering to any rule and regulations of international law. This regime is targeting even the ambulances. The health facilities are target number one.”

He revealed he had lost 10 colleagues, including paediatrician Mohammad Wassim Maaz, killed in an airstrike on the al-Quds hospital in the Sukari district of Aleppo in April.

Dr Ibrahim said: “In all conflicts hospitals are protected. Now in Aleppo people run away from the hospital, it is a huge target.”

Your email address will not be published. Required fields are marked with *